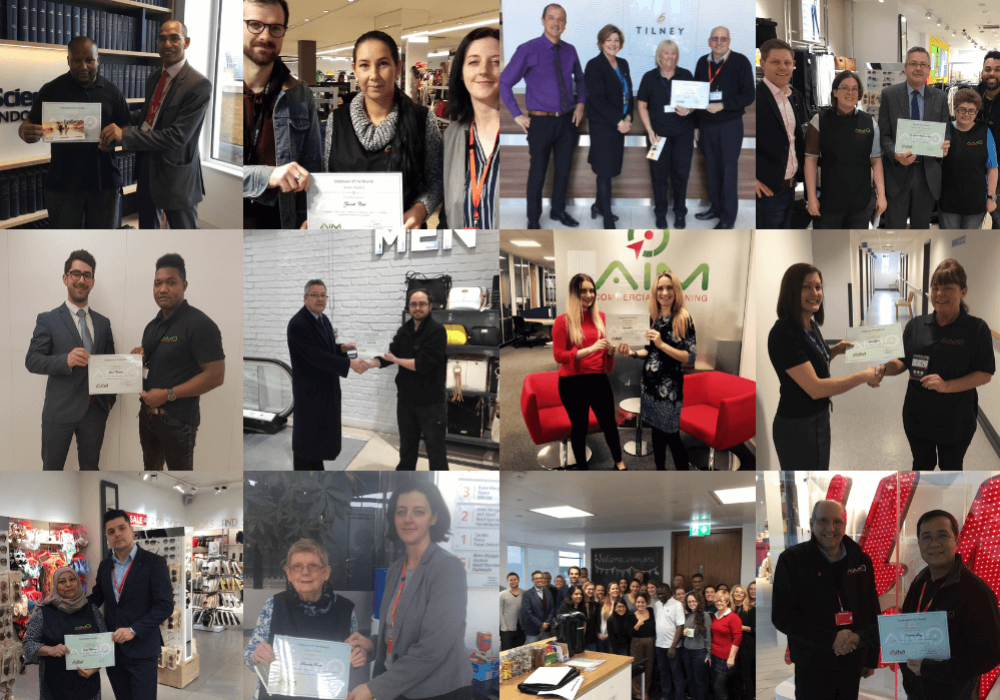 It is that time of year once again where we update you on the latest winners of our individual and team AIM Ambassador awards.

The AIM Ambassador Award is presented to support staff, cleaning operatives and managers who receive a winning nomination for their hard work and dedication to their job.

You can see previous winners here.

Orlando is our cleaning supervisor at the H&M store in Kingston and in addition to carrying out his own duties meticulously he is on hand and ready to assist others when required and always goes beyond expectations. Thank you Orlando!

Brenda has been working with AIM Commercial Cleaning since 2011 and is one of our cleaning team based at Seacourt Tower in Oxford. Brenda is forward thinking, conscientious and take a personal interest in the client; she will often contact the office out of her shift hours to ensure that all items have been ordered. We have also received a great deal of positive feedback directly from the client. Well done Brenda!

Ibrahim Manful received the Gold award after a very detailed nomination from the whole office team at IQ Student Accommodation. Ibrahim was described as hardworking, polite, enthusiastic and even adorable! We are pleased to hear that Ibrahim is thought of as part of the team at IQ Student Accommodation and we want to reward him for being an AIM Ambassador. Well done Ibrahim, keep up the good work!

General Manager, Bill Brown, added: “The client personally presented this award to him in addition to a nice bottle from the team at IQ Student Accommodation. The whole office stopped work, and all expressed how much they love him! You may notice that he was not wearing the AIM uniform and that is because they want him to feel part of their team.”

The award was issued as a team is that all the hard work and effort that is put in at the store was a joint contribution. The team have worked exceptionally hard to improve the standards at this store. The team will always embrace feedback, ensure they maintain the machinery and will never leave until they have confirmed that the store manager is happy with the standards.

Tina has worked with us since 2013 and is part of the cleaning team at Church View Health Centre in Kirby. Tina’s attendance record has always been excellent; she always arrives ready for work at 5 am even in the thick snow! Her colleagues describe Tina as being extremely reliable; you can count on her and is always jolly with a happy smiling face. Well done Tina.

The Silver award went to Hanna Douse who is part of our Support Team.

Hanna was nominated for her hard work but also her happy and helpful attitude through a hectic period for the Support Team. Hanna always goes the extra mile taking on jobs that are not part of her direct role, she communicates well and always answers the telephone with a cheerful “Hi, how are you?”. Excellent work Hanna!

The Gold award in February went to Subia Rahman.

Subia was nominated by the staff at Carlton Plastics based in Croydon where she is the cleaning operative. The nomination stated that the office, kitchen and toilets are spotless and Subia has a friendly and helpful attitude along with exemplary timekeeping. Well done Subia!

Our Silver award went to Richard Joyce, a Mobile Supervisor for the Northern Region. Richard was described in his nomination as hard working, reliable, friendly and having a can-do attitude. Richard is often diverted to visit clients at short notice and he happily helps. Richard is very versatile and carries out several different functions in his area and the feedback received from clients is always positive stating. Keep up the good work Richard.

March’s Gold award was shared between Tracie Gresham and Joanna Brady, who are both cleaners in the River Island Derby Store. They have worked for AIM since 2010 and have overcome some challenging circumstances with the support of the store and their Service and Regional Managers. Their performance is outstanding and this reflects in the store's appearance as a training store of excellence. Great work Tracie and Joanna.

Our Silver award went to Muluken Gebretsadik. He is the cleaner at both RI Sheffield Fargate and AMEY. Muluken has a pleasant and happy demeanour. He has never had a day of absence in the last four years. He is 100% reliable having helped out with several deep cleans overnight and still completing his usual shift the following morning. Well done Muluken.

The Gold winner was Julian Contrera.

Julian has proved himself to be a very worthy winner, while providing temporary cover to one of our London clients there was a problem with the door, and the site could not be locked. After reporting the problem rather than leave the premises unsecured Julian stayed until the client was able to return – many hours after the incident. Julian has also been described as always ready to help and very self-motivated. Well done Julian.

Another worthy winner, who is a cleaner at the River Island in Leicester Fosse Park. The feedback received from our client is that she is hard working, reliable and that she regularly goes above and beyond by assisting the store staff with additional tasks. Keep up the excellent work Zsanett!

The May Gold winner for Ambassador of the Month was Yvonne Shepherd who works at various contracts in Bracknell.

Yvonne has been described as irreplaceable and fabulous by our client Tilney and has also worked hard to transform the cleaning standards at River Island and H&M stores in Bracknell. Excellent work Yvonne!

Our Silver award went to another worthy winner Beverley Painter who cleans at the St Helens River Island store; she is one of our staff who ‘just gets on with it’.

Beverley consistently arrives on time, is smart and also stays longer than her regular hours to go above and beyond. Thank you, Beverley, keep up the good work!

For the final monthly Ambassador award, the Gold prize went to Earl Braithwaite.

Earl received 12 nominations in total from different staff members at New Scientist. There was far too much said about Earl to mention but of all of these nominations’ Earl was described as an absolute legend, dedicated, unfailingly polite, efficient and the best.

One person said that the only thing that outshines their surfaces is Earls smile.

Another said that Earl goes above and beyond to make everything as easy as possible for the staff at New Scientist.

Earl has clearly built up a great working relationship with the New Scientist staff and knows exactly what the client wants including keeping the coffee machine clean and ready for the staff at the start of every day.

Sonia was nominated by both of the clients she cleans for at Turkish bank head office and Cerillion. The Turkish bank offices have never been so clean, and Cerillion have said that she does a brilliant job and brightens up their day.